Published by Andrew Warner on November 22, 2022

I wasn’t sure I should do this interview because Cult DAO’s iconography is so shocking, the co-founder wouldn’t let me use his real name, and I couldn’t publish his voice.

But the more I looked beyond the mask, the more I saw that it’s simply an investment DAO, a group of people with a shared investment thesis funding projects they believed in. And even though names, faces, and voices were obscured, I could read the Discord chats behind their decisions and understand how they invest.

So, with that in mind, here’s how Cult has launched, grown, and operated, as told by its cofounder, Artorias.

Read the highly-edited interview below 👇 or listen to the podcast.

Interviewer: Why can’t I see your face in this interview?

Artorias: We don’t want people to focus on who we are. We want them to focus on what we built. People can trust us through our actions.

Interviewer: Cult invested in an anonymous founder who claimed to have previously created a multi-million dollar business. He later disappeared with your investment. Wouldn’t knowing his name have prevented that theft?

Artorias: One thing that’s so beautiful about the blockchain is that not having someone’s face doesn’t mean you can’t follow the breadcrumbs.

Interviewer: And you’ve improved from that experience?

Artorias: It was a turning point. We were able to create something like a template of how we want proposals for funding to work. Although it’s not required, we want people to come to Discord to talk to the community. We open up a workshop on every investment now. People who want funding basically pitch the DAO.

We streamlined the process so members can make more informed investment decisions.

Interviewer: How many projects have you funded?

Artorias: 105 different projects. That’s in the span of 6 months. So we’re looking at one every 3 days, on average.

That has equated to just a touch over $2 million worth of investments.

We launched on February 1, 2022. All we’ve ever seen is a downward-trending market. That meant the prices we got were way lower than actual value.

We’re not investing in projects at the peak of their popularity.

Interviewer: Your token is called CULT. I can buy and sell anything with it. Every time I spend CULT, 0.4% of the transaction goes to the DAO’s treasury, to be invested. 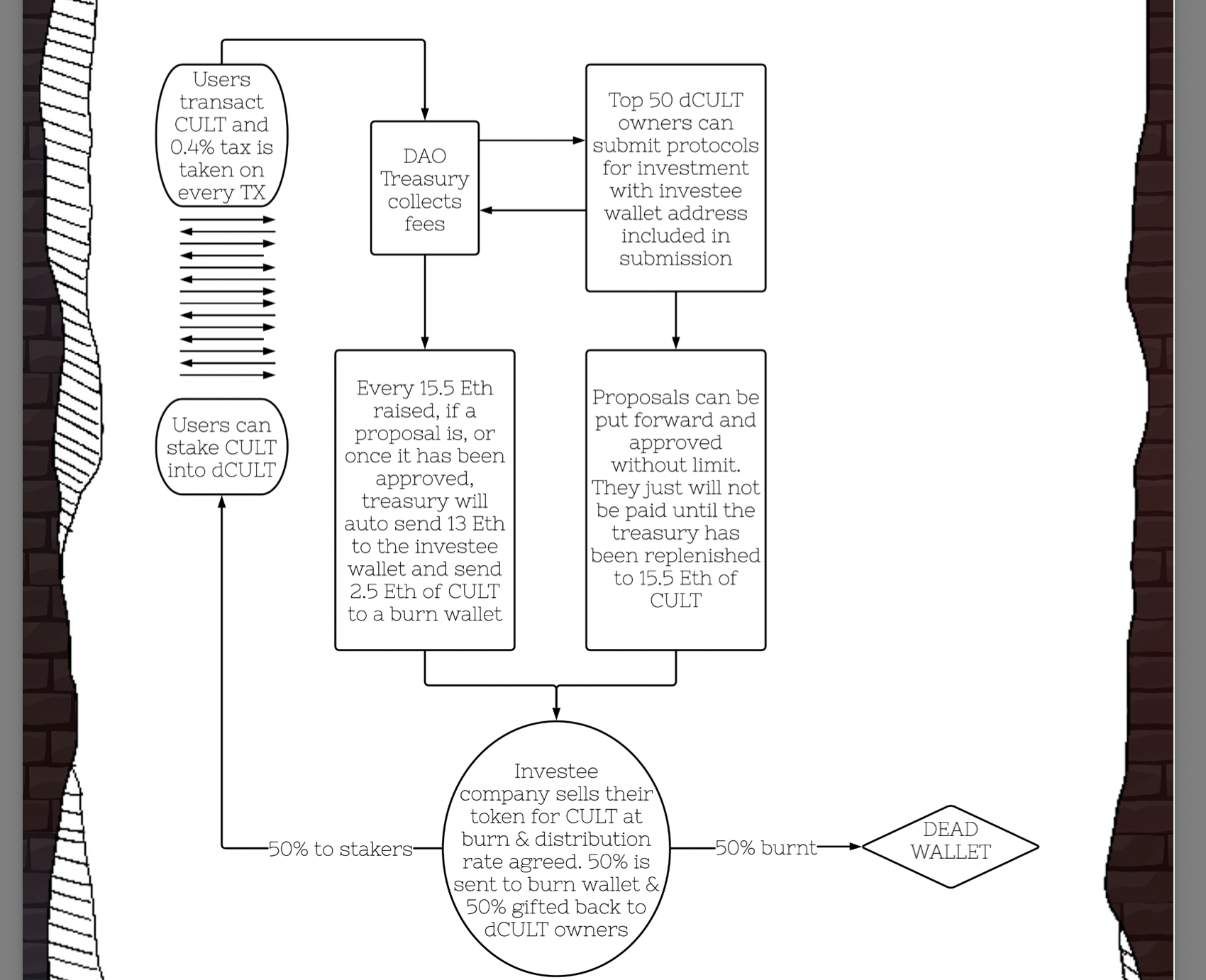 Interviewer: And to invest, CULT holders convert their CULT token to dCULT tokens, which allow them to vote on investment proposals.

Artorias: Yes, and the 50 people who have the most dCULT get to submit investment proposals, but they cannot vote. That’s an attempt to fix the issue of the top holder having the largest sway, an issue faced by a number of other DAOs.

Interviewer: And what happens with investment profits?

Artorias: The returns are used to buy CULT on the market. 50% of that is sent to a dead wallet, burned forever. The other 50% is sent to dCULT holders, stakers, as rewards that they can claim.

Interviewer: Why is 50% burned?

Artorias: For the same reason that for every 15.5 ETH invested following a proposal asking for our investment, 2.5 ETH worth of CULT is burned.

We’re deflating the supply of CULT.

There’s less available, which makes buyers have to pay more for CULT.

Interviewer: What does Cult believe?

Artorias: Many have people read the Cult Manifesto and invested because it’s such a powerful piece of literature. One of the things I really like about the manifesto is that there are a number of different issues with society.

The whole point of Cult is that we can do better. We, as individuals, should be able to make decisions for ourselves. That’s the reason DAOs came about.

If individuals invested their hard-earned money into a project, they should be allowed to make their own decisions.

Interviewer: How did Cult start?

Artorias: Up to the point of launch, it was funded by an unknown person who goes by the name Mr. O’Modulus.

He messaged me on Twitter and said, “Read this Manifesto.” I read it and wanted to be a part of it. That was the beginning of January 2022.

We were under $1 million market capitalization for a full 6 weeks before word got around about us. Then it took off.

Interviewer: What about the guardians?

Artorias: Mr. O’Modulus reached out to public decentralization advocates. The idea was that these 15 figures would be some of the initial guardians of Cult.

People like David Hoffman of BanklessDAO and Kris Jones of Gitcoin.

Interviewer: How did you get more people involved?

Artorias: It was a struggle. One reason is that with web3, there are regulations that stop you from using mainstream advertising venues.

So the number 1 rule of Cult was to talk about Cult.

We had a loyal community that would go out on Twitter. There were people making YouTube videos.

Plus there’s a bit of a shock factor with our name and logo. It’s quite strong branding.

There were also rumors flying around about the identity of Mr. O’Modulus That kind of mystery seemed to catch poeple’s imaginations.